The Shaping of an “Angry” Black Woman (Book Review)

An assorted collection of modern-day poetry, poet Tamara Woods’ first collection “The Shaping of an ‘Angry’ Black Woman” teases the reader for more.
With its illusive title, one would conceive this collection to specifically revolve around the Black American understandings—but, this is more than that. Poetry book, “The Shaping of an ‘Angry’ Black Woman”, richly shows the complexities of humans (primarily women) and the misconceptions that journey along the way. Poems “The Child Who Never Was” and “Doctor’s Sensitivity” capture the silence, solitude, and sadness of not having a child; and whether one should question Faith. Woods opens the poem “The Child Who Never Was” with somberness, “I didn’t know I wanted you until I wasn’t sure if I could have you.” These poems exemplify the vulnerability that accompanies a woman’s existence. 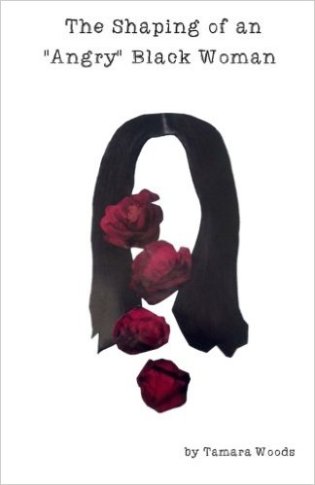 Woods also challenges modern perceptions of race in “A Step Outside Your Box” by mentioning, “Blond hair gleams like a halo / When light shines on you. . . / He’s nicer, because he’s lighter.” And she tackles the not-so-subtle offensive comments heard such as, “What’s it like to fuck a Black woman?” only to respond, “Like being with an alien with better hair. . .”
Many of the selections are exclusively calculated for spokenword, such as poem “An Ode to Hip Hop”—a rhythmic awakening of the portrayal of women in the hip hop culture with lines, “Your misogyny dripping from their chins. Shiny on their grins.”
With its extensive lines and fewer line breaks and minor editorial concerns, this collection is varied in style and substance and does not devalue the message and efforts of this collection.

Woods’ strength lies in the poems of womanhood and motherhood as I feel a collection from her around these specific topics is much needed to help women of all cultures during their daily struggles.

Author of "Beyond Bougie", "Cold, Black, and Hungry" and many other books. www.StephenEarleyJordan.com
View all posts by Stephen Earley Jordan II →
This entry was posted in Book Review, Writing and tagged Book Review, poetry. Bookmark the permalink.